MANILA, Philippines — Results of clinical studies on the use of lagundi (Vitex negundo or Chinese chaste tree) and tawa-tawa (Euphorbia hirta or asthma-plant) as a supplementary treatment for the coronavirus disease (COVID-19) may be announced by the end of February, the Department of Science and Technology (DOST) said Friday (January 8, 2021).

The research and development project on the medicinal plants was added as one of the initiatives being funded by the DOST last year in its effort to help the government fight the coronavirus pandemic, along with the clinical study on virgin coconut oil (VCO).

As for the VCO study, Dela Peña said they are expanding the trials to get more data.

Initial trial data from the DOST showed that VCO as food supplement can reduce symptoms among probable and suspect coronaviruses disease cases.

Big things come in small packages. This was what the Cagayan State University (CSU) has found out after having uncovered in its laboratory that a small fruit endemic to the Philippines and other southeast Asian countries lived up to its long-held folk promise.

The tiny ruby-red cherries known scientifically as Antidesma bunius (L.) Spreng (Bignay) underwent extensive laboratory studies in Natural Product Research & Innovation Center (NPRIC)-CSU for months that led to coming out with a clean breast of reports confirming the numerous anecdotal health and folkloric claims by the local Filipinos where it is grown.

Using an animal model of respiratory diseases, Bignay has proven to be a powerful anti-inflammatory agent and effective against lung disorders like airway inflammation, asthma, allergy, and cough/colds. Bignay extract was also tested to be potent against chemically-induced rheumatoid arthritis, gout, and joint pains in rat and LPS- induced acute lung injury in mice in vivo.

It has an anti-oxidant property, anti-inflammatory activity, a cholesterol buster, and an immune system booster.

Balik Scientist Prof. Maria Nilda M. Muñoz, Inventor and Principal Investigator of the Bignay project, said that “the local scientific community that has put bioavailability-based studies as among its priorities gave the Bignay study result a one big leap.”

Bignay is grown in Cagayan Valley and until the study, was just among the popular plant-based medicines employed by herbal doctors to their patients.

The long tradition of testimonials can now be said to possess with a seal of scientific and medicine merits after the conclusion of the CSU study and placing the fruit as a good source of beneficial human health supplements.

This Bignay study was supported by CSU President Urdujah Gaerlan Alvarado, and Department of Science and Technology Regional Director Sancho A. Mabborang. (by: Manila Standard)

The Department of Science and Technology (DOST) did not waste time to deliver urgent researches and services to prevent the spread of the Covid-19 pandemic in 2020. At the same time, it also did not fail to pursue its research and development (R&D) programs and projects despite the pandemic.

Besides these huge responsibilities, the DOST also implemented other tasks that complemented its R&D programs: its international S&T linkages.

The DOST achievements in 2020 were contained in the report, “Leading science, technology and innovation for Inclusive Growth and Development in the time of Covid-19.”

The Science department, through its Office for International Cooperation, led by Assistant Secretary Dr. Leah J. Buendia, facilitated the harnessing of international relations for the country’s S&T.

In the past year, through its international linkages, the DOST signed five agreements with bilateral partners. At the same time 18  agreements are currently in the pipeline for negotiations, the report said.

The five signed agreements are:

Memorandum of understanding on S&T in health between Philippine Council for Health  Research and Development, University of the Philippines Manila, and London School of Hygiene and Tropical Medicine

Memorandum of agreement with the Royal Academy of Engineering

Operational Alliance Agreement with the British Council, and

Co-sponsorship agreement between the DOST and US National Institute of Allergy and Infectious Diseases.

To harness its international relations, the DOST officials and Filipino scientists and experts participated in at least 40 bilateral and multilateral scientific meetings and ministerial conferences, the report added.

In these meetings, DOST representatives delivered the country’s positions and statements related to science, technology, and innovation (STI).

The country, through the DOST, also provided inputs to multilateral joint statements of solidarity, declarations, resolutions, and proposals.

With the DOST’s continued leadership and active participation in these multilateral activities, the Philippines was once again elected to the United Nations Commission on Science and Technology for Development effective January 1, 2021.

“All these have put the country as a steady figure in multilateral STI negotiations, particularly in the ASEAN, Asia-Pacific Economic Cooperation, and the United Nations, where the Philippines has regained stronger recognition as a more active and stronger partner in regional and international STI initiatives,” said Science Fortunato T. de la Peña.

Strategic partnerships with bilateral partners have evolved to a higher plane that included joint research and capacity-building programs that aim to contribute in improving the Philippines’ STI standing in the international community, according to the report.

The DOST is coordinating the implementation of six joint research projects.

This year, DOST also welcomed a new joint research program with the People’s Republic of China.

Through these grants, the DOST brings together local and foreign researchers to work on a specific project and allow them to share ideas and resources.

There are also 24 scholars under the Asean Scholarship with two students who graduated this year.

However, due to the pandemic, the Philippine partners have postponed some activities for the scholarships.

At the same time, nondegree capacity-building activities, including the Leaders in Innovation Fellowship under the Newton-Agham Program, as well as the participation of Filipino students, researchers, and faculty members of Philippine higher education institutions in capacity building programs of DOST’s bilateral and multilateral partners were also undertaken during the year.

“These programs support DOST’s efforts to develop a strong cadre of scientific talents that will work for the STI in the country,” de la Peña said. (Written by:  Lyn Resurreccion) 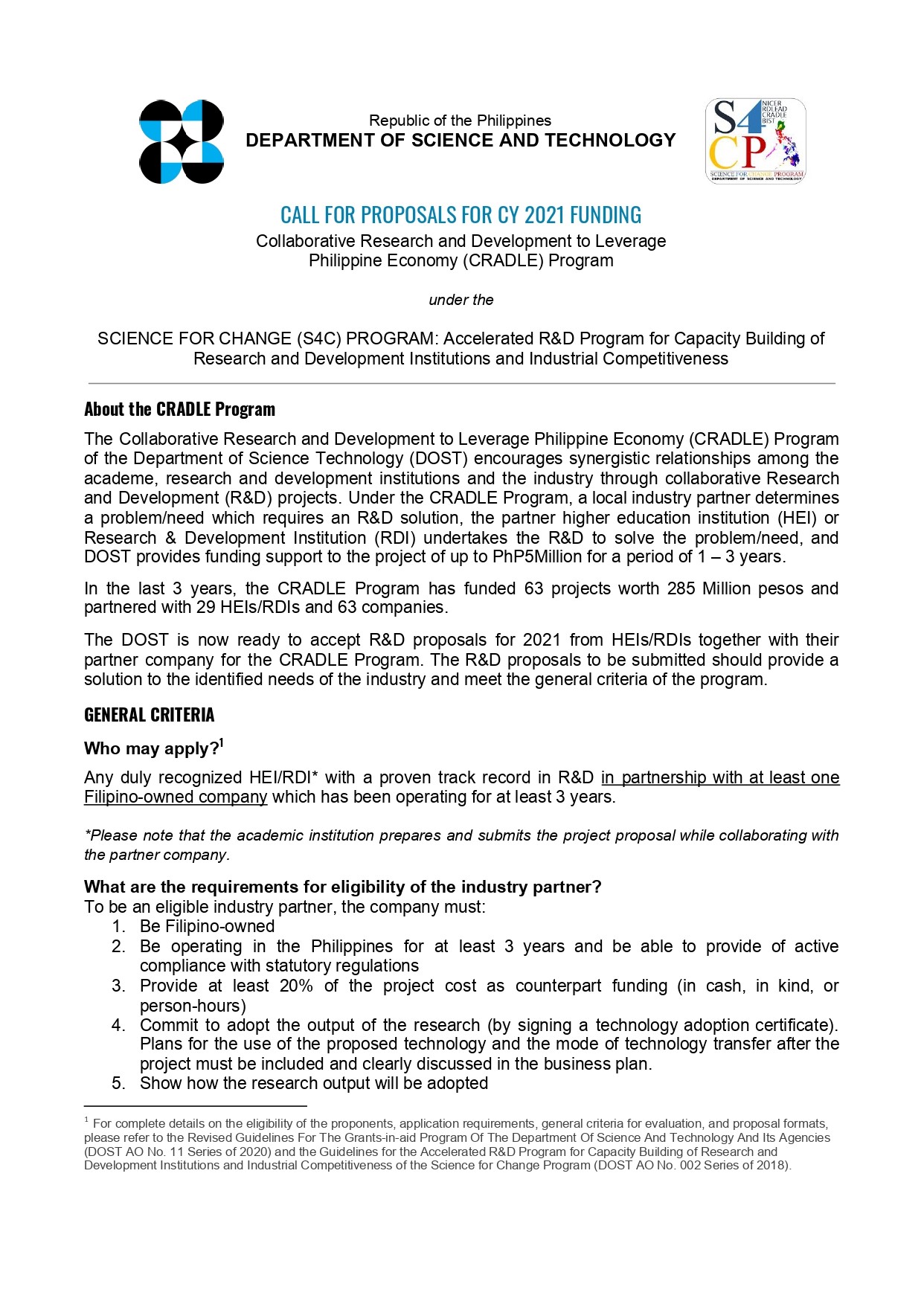 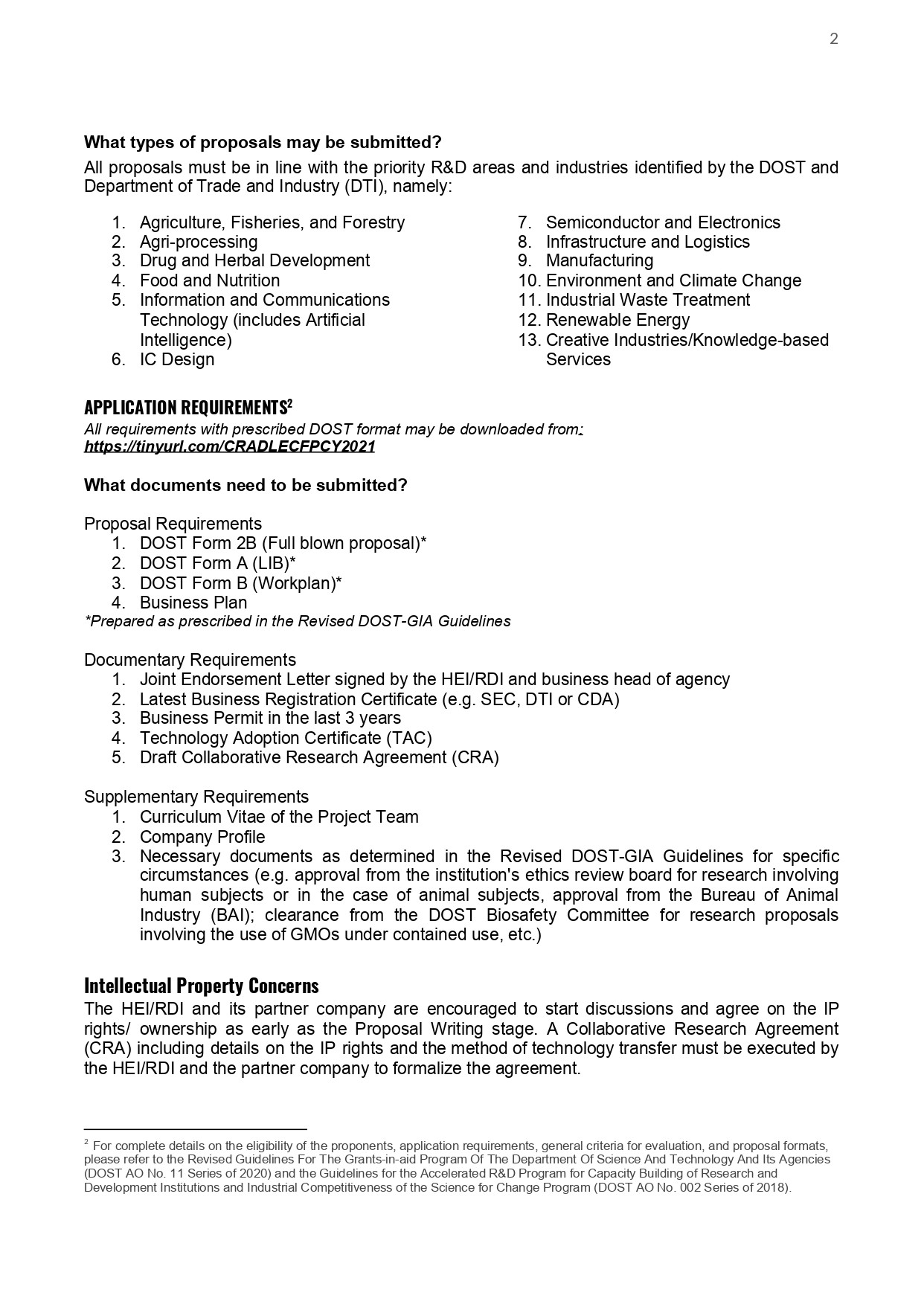 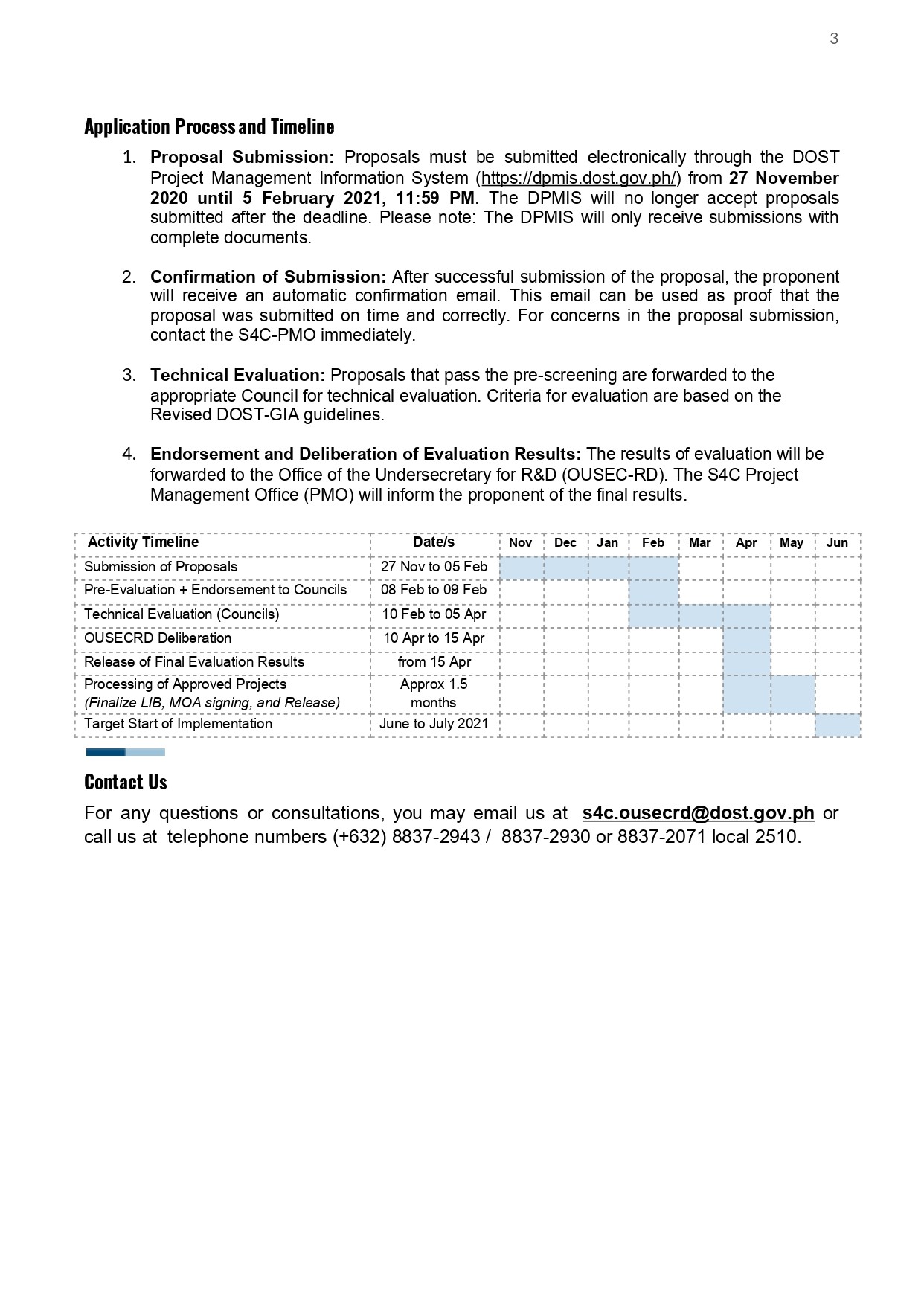 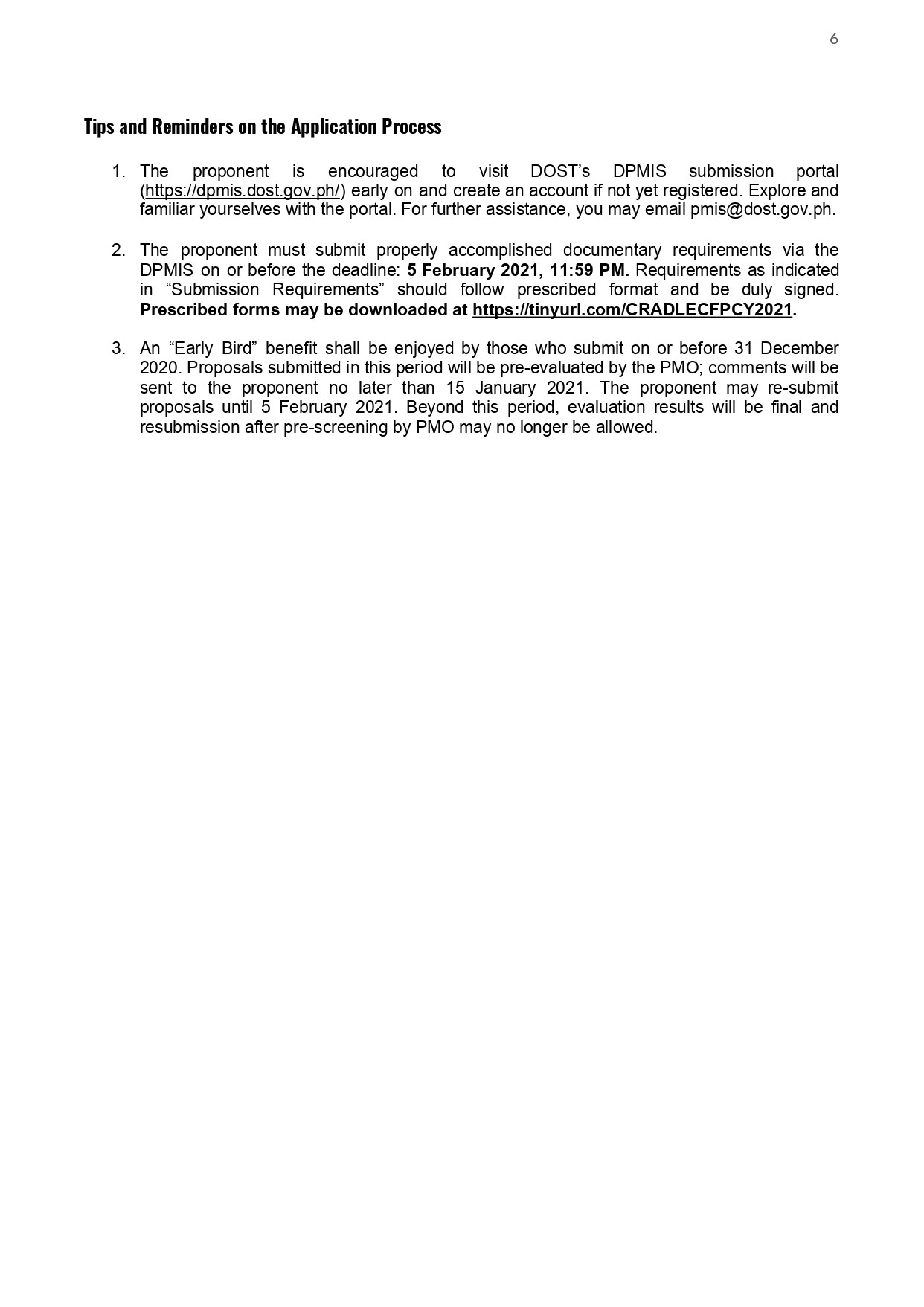 Under Republic Act No. 11337 or the Innovative Startup Act, the Department of Science and Technology (DOST) has been identified as one of the key government agencies tasked to support research and development (R&D) activities of Filipino-owned startups and promote the startup ecosystem within the country. RA 11337 also authorizes the establishment of a Startup Grant Fund (SGF) under DOST which will be used to fund R&D activities of eligible startups that are aimed at improving their core technology, enhancing the product’s market potential, and refining their existing products, processes, or services.

The Philippine Council for Health Research and Development (PCHRD), one of the sectoral planning councils of DOST, greatly recognizes the importance of R&D in addressing the health issues of the country. In support to the operationalization of RA 11337, PCHRD created a Startup Research Grant Program under DOST SGF that aims to support research activities of startups in the health sector.

Objectives of the Program:

Recipients of research grants under this program are entitled to receive the following benefits:

Research proposals must be drafted based on any of the following research areas:

Interested applicants may submit research proposals under any of the following funding tracks:

To avail of the grant, a startup must have the following qualifications:

Here is how to apply:

The following guidelines shall be observed:

I have a product idea but I am still building a working prototype. Can I apply for a grant under this program?

Can I request for funding assistance above PhP 3M?

Do I have to use the DOST LIB form for the capsule proposal?

Are we allowed to request for extension?