The Philippine Council for Health Research and Development of the Department of Science and Technology (DOST-PCHRD) funds a research which aims to develop a diagnostic kit for the detection of drug resistant Human Immunodeficiency Virus (HIV). Once made available in the market, this breakthrough technology will create a positive impact on the lives of people living with HIV not only in the Philippines but around the world.

“Having a test kit that will detect the resistance of HIV to drugs at the start of medical care allows doctors to decide on the best treatment options for their patients,” explained Dr. Edsel Salvaña, Project Leader from the University of the Philippines National Institutes of Health (UPNIH) in the recent installment of the Talakayang HeaRTBeat series organized by the Philippine Council for Health Research and Development (PCHRD) of the Department of Science and Technology (DOST) on 21 May 2019 at the Luxent Hotel, Quezon City.

As explained by Dr. Salvaña, the problem with HIV is it can become resistant to medication even at the start of treatment. This means some drugs may not work on the patient. Knowing the resistance of HIV to drugs is very crucial especially for our country where there is only a limited number of antiretroviral drugs (ARVs) available.

Another challenge in the process of HIV diagnosis is the availability of only two organizations in the country that can test for the virus – namely the UPNIH and the Research Institute for Tropical Medicine (RITM) – it takes a long time to get the results, and the cost of the test itself is quite expensive.

The research project of Dr. Salvaña focuses on the use of an automated DNA sequencing tool that can potentially help diagnose HIV resistant cases faster and at a lower cost. The ultimate goal is to produce a kit that is accessible, affordable, and world-class possibly by 2023.  “There is no cure yet (for HIV). Kung masyadong mahal (yung tools), edi ibababa natin yung cost para we can also take care of the Filipino patients,” he stressed.

As of the latest, 42 HIV cases were said to be reported daily in the Philippines, which is higher than the data recorded in the same period last year. 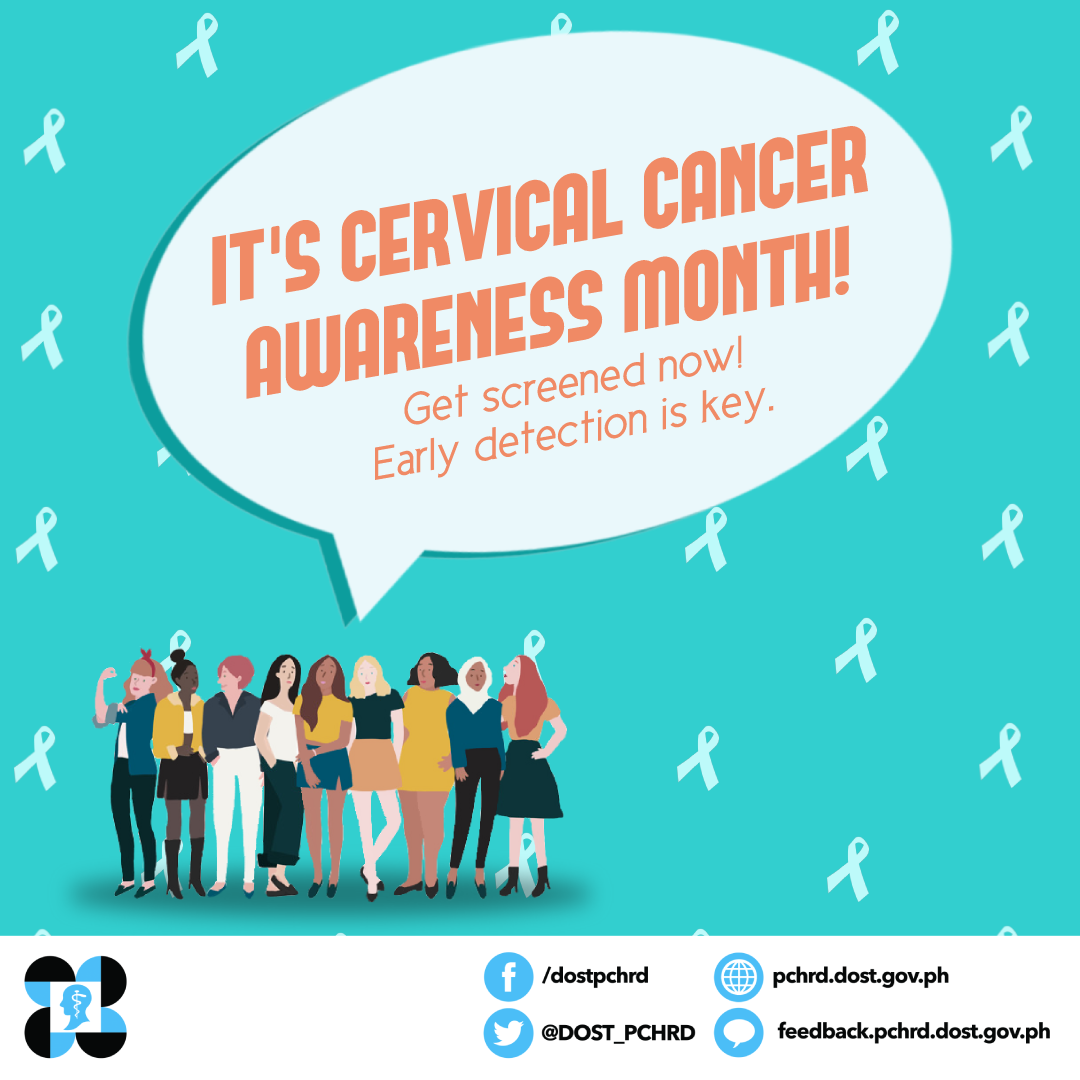 Did you know that all women, regardless of age, race, and lifestyle, are at risk of cervical cancer? But did you also know that it is highly preventable and curable?

What is cervical cancer?

Cervical cancer is caused by the human papillomavirus (HPV), a virus transmitted through sexual activities. The probability of a woman acquiring the virus in her lifetime is at 75-80%; however, the virus does not always develop into cancer. Smoking, having multiple sexual partners, early sexual activity, long-term use of oral contraception, a weak immune system, and the history of cervical cancer within the family increase the risk of the virus developing into cancer.

The symptoms of the disease in its late stages include vaginal bleeding beyond the menstruation period, unpleasant vaginal discharge, and abdominal pain or swelling.

How do I prevent cervical cancer?

Several methods can be used for screenings such as the VIA (visual inspection using acetic acid) and pap smear. According to a study by the University of the Philippines- Department of Health Cervical Cancer Screening Health Operations Research Project, the VIA was found to be the most effective and cost-effective screening method. For preventative measures, HPV vaccines are available and may be given to patients as young as 9 years old. The effect of the vaccine lasts a lifetime and has been proven to be safe for all.

Despite these alternatives, cervical cancer is the 2nd most common cancers among Filipinas.

Source: Bacarra A. (2019, May 22). Cervical Cancer Awareness Month. What you need to know.Retrieved from :http://www.pchrd.dost.gov.ph/index.php/news/6446-cervical-cancer-awareness-month-what-you-need-to-know?fbclid=IwAR2qUudPXO9jxiAXi6RLELV_7fBzgoifx8_xI2G10VoK-7fA5iCTDlALeug 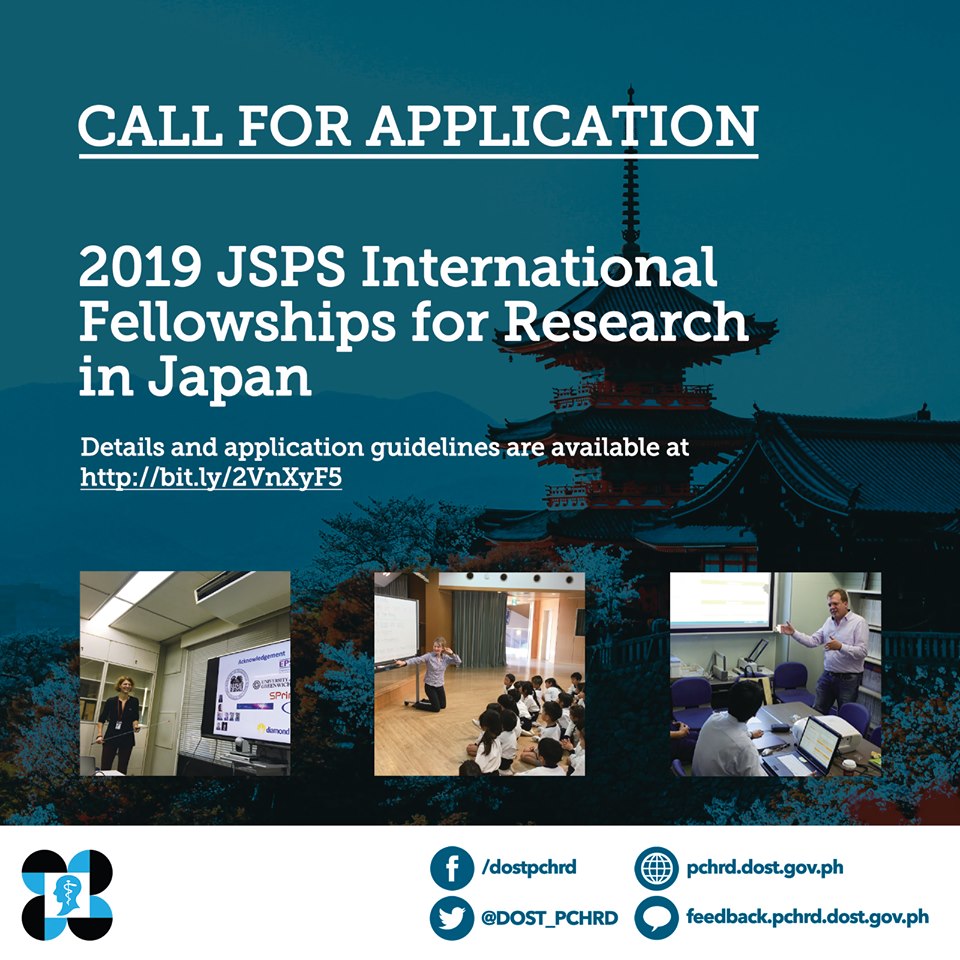 Japan Society for the Promotion of Science (JSPS) is an independent administrative institution which aims to promote international cooperation in diverse fields of science. The Society carries out programs for overseas researchers to conduct collaborative research, discussions, and opinion exchanges with researchers in Japan. 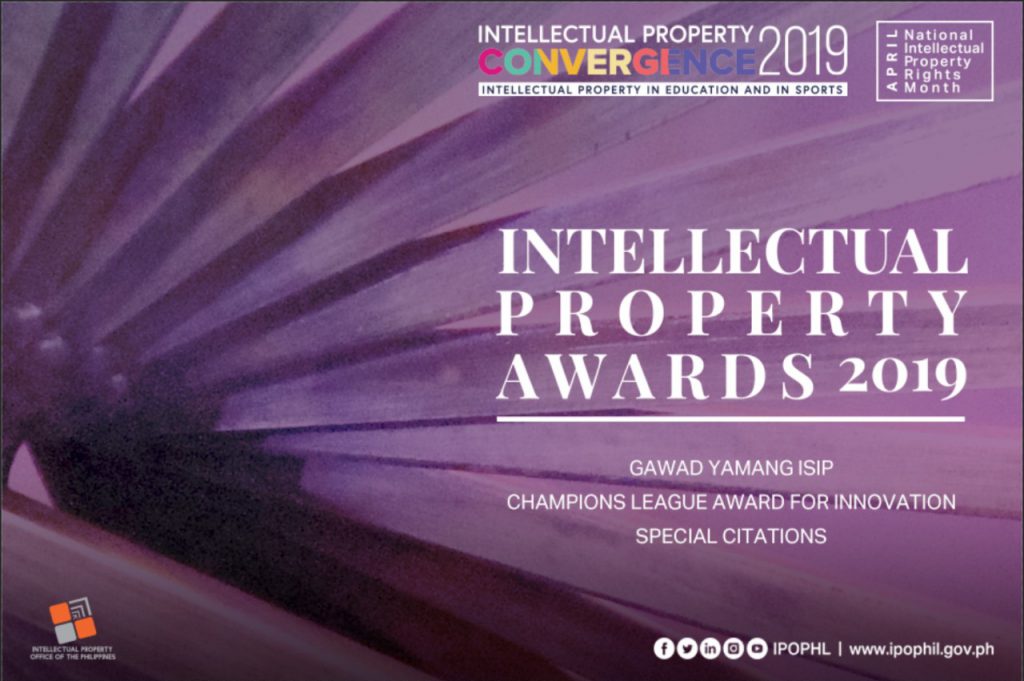 The cream of the crop in the Philippine scientific, creative, and research circles were awarded in the 2019 IP Convergence forum on Friday, in recognition of their use of the intellectual property system in contributing to the sciences and arts.

IPOPHL lauded six individuals and one business in the  2019 IP Convergence Forum, all of which have filed for intellectual property as they’ve made ground-breaking work in their fields.

the Gawad Yamang Isip for Science and Technology  (Agham at Teknolohiya) is awarded to famed Filipino woman biochemist Dr. Lourdes Cruz. Dr. Cruz’s isolation and characterisation of a venom called conotoxin (from marine cone snails) was key to improvement of the substance as a biochemical probe for testing brain behavior. Another great Filipino mind IPOPHL recognized for Agham and Teknolohiya was Dr. Ramon Barba, a world-renowned scientists whose invention of flower induction in mangos and pineapples revolutionised their fruit production. Dr. Barba’s flower induction method made possible the availability of mangoes the whole year-round. 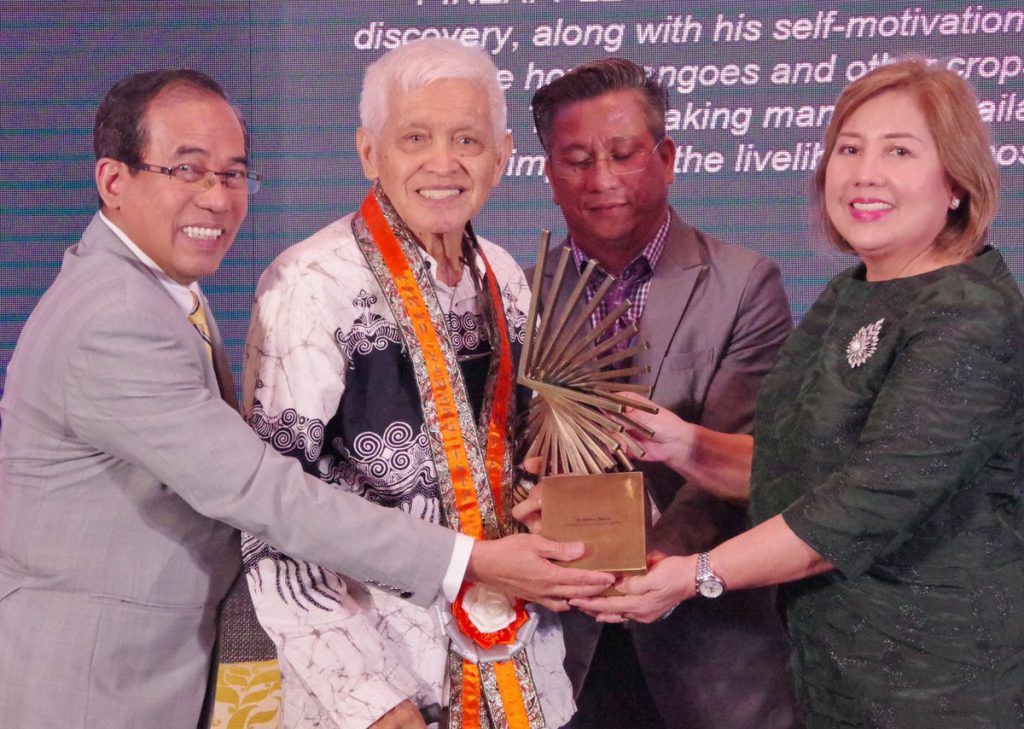 Receiving the Gawad Yamang Isip for Arts and Literature (Sining at Panitikan) is Ramon Magsaysay Awardee, Ligaya Fernando-Amilbangsa. Her promotion of the pangalay dance of the Sulu archipelago, as well as her studies on Muslim culture, keeps alive the indigenous arts of Southern Philippines. 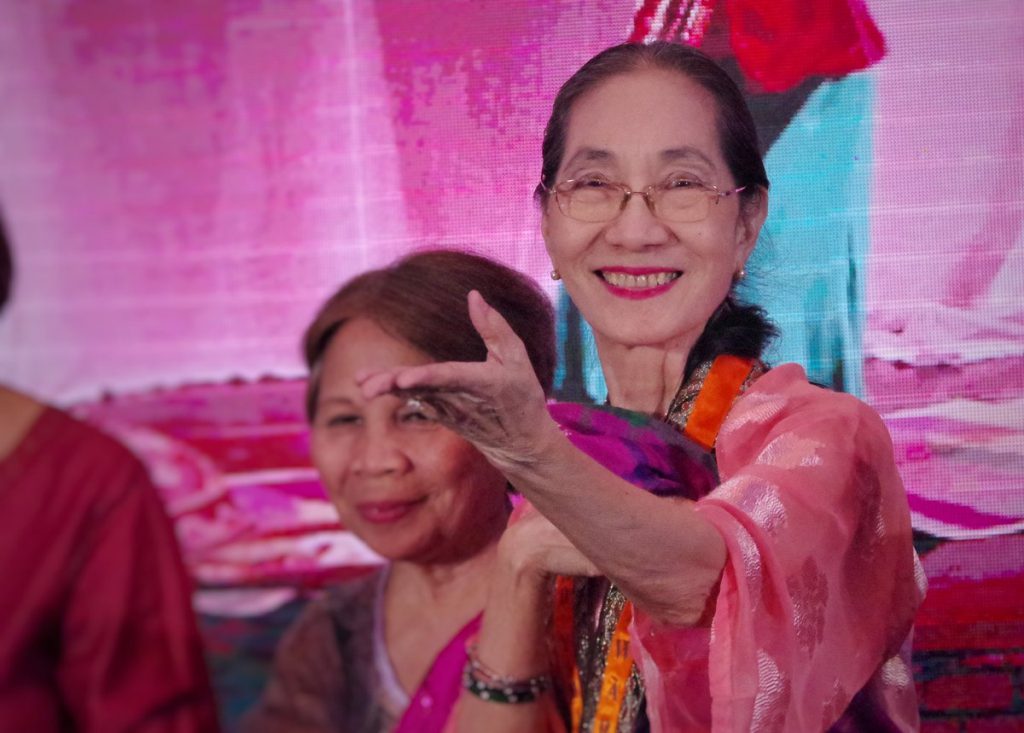 A legend in the Philippine fashion scene, Beatriz “Patis” P. Tesoro was given the Gawad Yamang Isip - Kagamitan at Moda for her long-standing advocacy to elevate local fabrics (particularly the pina cloth) to the global stage and mainstream traditional Filipino garb to contemporary fashion. 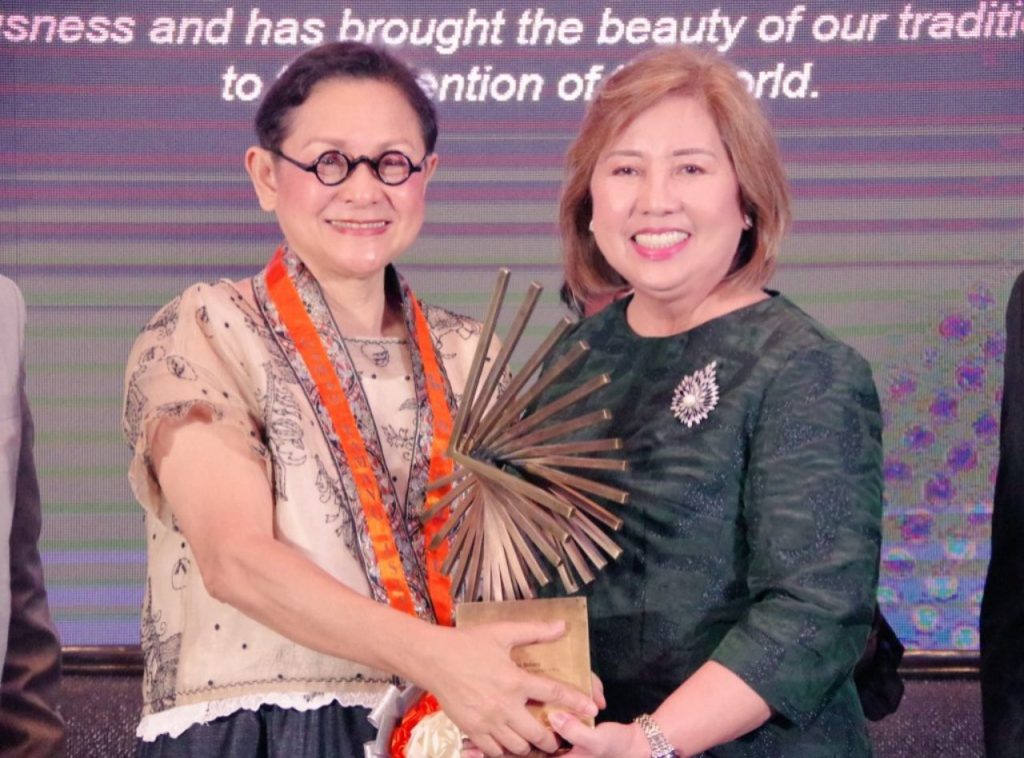 National Artist for Literature F. Sionil Jose can add the Gawad Yamang Isip sa Sining at Panitikan to his numerous accolades, given for his five decades of engaging he Filipino consciousness through socially-relevant works of literature. 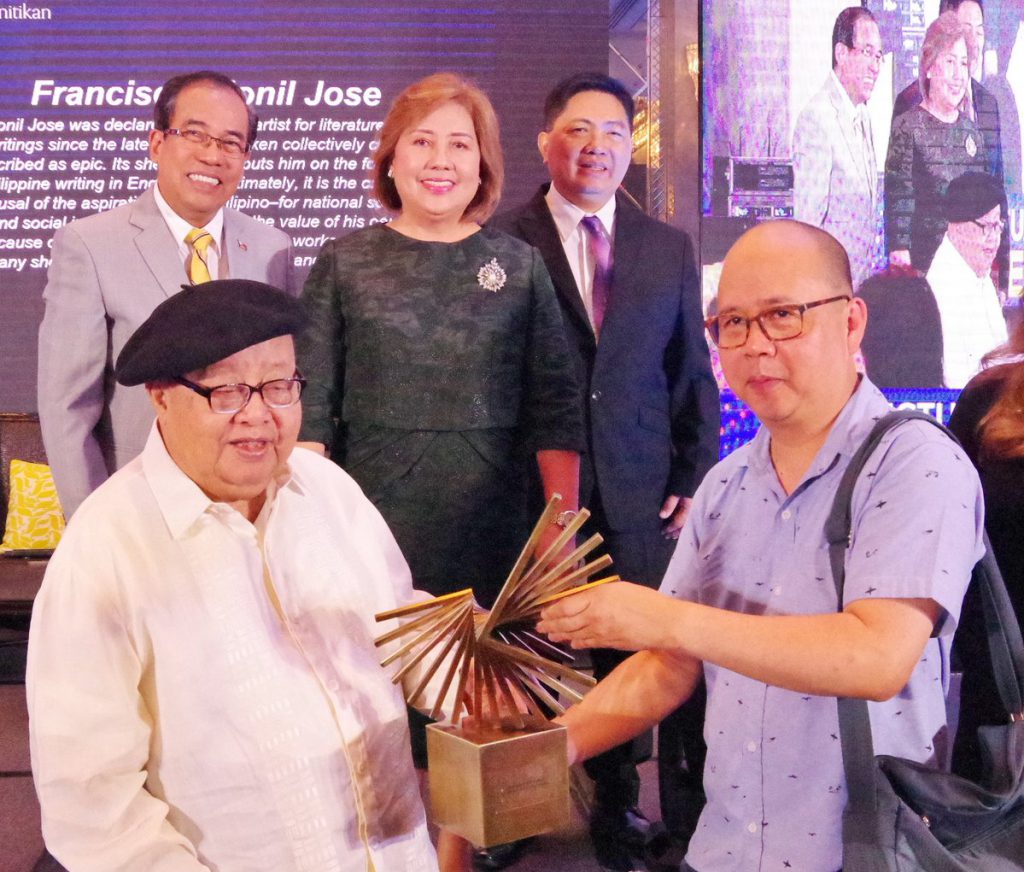 For being a champion of accessibility of affordable medicine, while deftly using trademark as a strategic business tool, the Generics Pharmacy - the largest network of drugstores in the country - was awarded the Gawad Yamang Isip for Business (Negosyo). Finally, garnering the coveted Intellectual Property Champions League Award is none other than technology innovator, Silicon Valley engineer - “the Philippines’ Bill Gates”-   Diosdado “Dado” Banatao. Mr. Banatao’s invaluable invention of a more efficient way of linking computers by simplifying the design with fewer chips, is a technology found in most computers today.

About IPOPHL’s Awards and Recognition Program

Gawad Yamang Isip recognises Filipinos who have shown distinct ingenuity and talent in their specific fields, using the IP system in the process.

Champions League, on the other hand, are given for individual or institutional contributions that have long-term, beneficial effect to the IPR environment and IP system in the Philippines.

IPOPHL Special Citations are given to prolific users of the IP system - ‘record-breakers’ in their IP-related work, such as enforcement agencies who have seized significant amounts of counterfeit goods, media practitioners who have extensively covered IP news, and institutions and individuals who have filed the most number of IP.

The Department of Science and Technology - Philippine Council for Health Research and Development (DOST-PCHRD) in cooperation with Philippine Association of Medical Journal Editors (PAMJE) Inc. and Asia Pacific Association of Medical Journal Editors (APAME) is organizing the 16th National Medical Writing Workshop and 9th Writeshop for Young Researchers on 12-13 August 2019 in Cagayan De Oro. The workshop aims to help young investigators in health and health social sciences acquire practical knowledge and skills in preparing a scientific article for publication in a scholarly peer-reviewed journal. Successful applicants will be granted free workshop registration, accommodation and meals during the workshop, and will be assigned to a mentor-facilitator who will guide them in preparing their articles for a brief presentation.
Requirements for participants

The workshop is designed for a maximum of forty (40) researchers in health sciences and health social sciences, aged 40 years old and below, who have a research project completed not more than 2 years ago and have drafted a publication-ready manuscript of maximum 2,500 - 3,000 words, formatted for submission to a scholarly biomedical journal. Note that thesis, dissertations, and technical reports in original format and length do not qualify.
The selected draft manuscripts will be reviewed and revised during the workshop, based on the lectures and exercises, under the guidance of the faculty and mentor – facilitators. All participants are expected to present a 7-minute power point summary of their revised manuscripts on the second day of the workshop, and agree to submit the article to an appropriate scholarly peer-reviewed journal within three (3) months after the workshop.
Instructions

Applicants should send the following requirements via email to This email address is being protected from spambots. You need JavaScript enabled to view it. on or before May 15, 2019.
Please use this subject format in your email: Application_16th Writeshop_(Surname)
Please save your documents in this format:
The results of the selection of participants for the Workshop will be communicated on June 5, 2019.

Should you have any concern, do not hesitate to contact Ms. Quiella Landicho (e-mail address: This email address is being protected from spambots. You need JavaScript enabled to view it.; tel. no.: (02) 837-7534 loc. 203/204).
Source: Dimailig, CJ. (April 24, 2019) Call for Participation: 16th National Medical Writing Workshop and 9th Writeshop for Young Researchers. retrive from: http://pchrd.dost.gov.ph/index.php/news/6440-call-for-participation-16th-national-medical-writing-workshop-and-9th-writeshop-for-young-researchers