The Department of Health (DOH) and the Philippine Council for Health Research and Development (PCHRD) is pleased to announce the first call for research proposals for the Advancing Health through Evidence-Assisted Decisions with Health Policy and Systems Research (AHEAD-HPSR) Program.
Interested institutions, organizations, and researchers are invited to submit a full proposal on any of the topics listed below.
1. Research on Global Trends and Impact of International Bilateral Cooperation on Healthcare.
2. Development of Clinical Practice Guidelines (Phase 1).
3. Capacity Assessment of Health Policy and Systems Research in the Philippines.
4. Strengthening Urban Primary Healthcare Service Delivery Through the Use of E-health Programs in China, Nepal, and the Philippines (The SUPER Study).
5. Estimating Burden of Disease per Province in the Philippines.
7. Financial Reporting Assessment to Ascertain Financial Position of DOH Hospitals.
8. Foodborne Trematode Prevalence Survey.
9. Gender Responsiveness of TB Prevention and Management at the Community Level in Quezon City.
10. Strengthening Evidence Base and Building Capacity on Health Impact Assessment (HIA) of Development Policies and Projects in the Philippines (Phase 1).
11. Determining the Prevalence and Behavioral Factors of HIV and STI in the Philippines.
12. Longitudinal Cohort Study on Filipino Boy and Girl.
13. Determining the Implementation Status of Benefits under Magna Carta of Public Health Workers in the Philippines.
14. Mental Health Protocol within the Urban and Rural School Systems.
15. National Health Expenditure Survey.
16. Mycobacterium tuberculosis DNA extraction from sputum smear negative/ chest X-ray suspects among participants in the 2016 NTPS.
17. National Survey to Monitor the Impact of the Sin Tax Law.
18. Conduct a Population Based Survey using Lot Quality Assurance Sampling (LQAS) Methodology to Determine Contraceptive Coverage in 17 Provinces of the Philippines (One Province Per Region).
19. Qualitative Study on the Causes and Effects of Adolescent Pregnancy.
20. Rapid Assessment of Patient Flows in 4 DOH-retained Hospitals in Metro Manila.
21. Health Burden of Road Crash Injuries in the Philippines: Constructing an Index for Road Safety Using Metro Manila Baseline Investigation.
22. Operations Research on the Implementation of the Single Joint Ethics Review Process
23. Health Burden of Road Crash Injuries in the Philippines: The Epidemiology of Cases of Road Crashes and Injuries in Major Tertiary Hospitals in the Philippines (Metro Manila, Cebu, and Davao).
24. Health Burden of Road Crash Injuries in the Philippines: Investigating the current road management and road legislations in the Philippines.
25. Pilot Testing of a Scorecard Designed to Assess the Performance of Local Government Units (LGUs) in the Elimination of Neglected Tropical Diseases in the Philippines: Identifying Implementation Issues and Potential Solutions.
26. Support to Policy Development for the National Tobacco Control Program.
27. Sweetened Beverage Tax Interim Monitoring
28. Capacity of the DOH to Assist Small and Medium Scale Industry-driven Development of New Medical Products and Technology Research and Development
29.Exploring Philippine Opportunities and Identifying Possible Offers and Requests on Trade in Health Services Towards the Achievement of National Health Objectives
Kindly register as a proponent at http://www.projects.pchrd.dost.gov.ph/index.php/reg and attach the following requirements on or before February 21, 2019:

MANILA -- Filipinos may now have access to basic mental health services at the community level with the signing of implementing rules and regulations of the mental health law.

Department of Health (DOH) Secretary Francisco Duque III signed on Tuesday the IRR of Republic Act 11036 (Mental Health Law) which he said would end the stigma associated with mental illnesses.

The Mental Health Law, signed in 2018, provides basic mental health services down to the barangay level and increases the capacities of mental health professionals.

Duque said the number of cases of patients with mental health problems is increasing. He identified the causes as both economic and social in nature like poverty, malnutrition, peer pressure and emotional trauma.

About 3.5 million Filipinos, or roughly 4 percent of the population, have mental health problems, he said.

Talking about mental health creates stigma among Filipinos but it is high time to consider it a serious issue, Duque said.

"This is important because we want to send a message to those living with mental illness that you are not alone. We want to support you. There is hope. Recovery is possible. There is no shame in talking about your condition and getting help," he added.

According to the World Health Organization, more than 100 million people suffer from mental health disorders in the Western Pacific region.

The Department of Health (DOH) today leads the nation in observing the Goiter Awareness Week (GAW) 2019 with the theme, “Goiter Sugpuin, Isip Patalinuhin, Iodized Salt Gamitin,” which aims to highlight the vital role of iodized salt in preventing thyroid disorders such as goiter. Partners and stakeholders like the Philippine Thyroid Association, Philippine Society of Endocrinology, Diabetes and Metabolism, Iodine Global Network, National Nutrition Council and DOST-FNRI will also disseminate information and educate the public on the effects of iodine deficiency.
According to the 2012 Philippine Thyroid Diseases Study (PhilTiDes-1), the prevalence of thyroid function abnormalities in the Philippines is 8.53% among the adult population, and among the thyroid disorders, goiter is most common with a prevalence rate of 10.12%.
Meanwhile, the 2013 National Nutrition Survey revealed that about 5.8 million Filipinos were afflicted with thyroid disorders in different clinical presentations. These manifest as goiter, thyroid malignancy, mental deficiency, physical deformities, congenital hypothyroidism, cretinism, and reproductive failure. If untreated, these disorders could lead to the detrimental reduction of intellectual and physical capacity and even death among susceptible individuals.
People with goiter often have an abnormal enlargement of the thyroid gland which can lead to the appearance of a mass or swelling in the neck. The signs and symptoms of goiter can be varied and may include tiredness, a decrease or increase in weight, low or increased appetite, depression, dryness of skin and hair, sleepiness, diarrhea or constipation and menstrual irregularities (for women).  People who experience these symptoms should immediately see a doctor.
Since iodine deficiency is the most common cause of goiter in the Philippines, people are advised to use iodized salts in their meals and to eat food rich in iodine such as dairy products, seafood (shellfish and seaweeds), meats, bread and eggs.  Special attention should be provided to pregnant women because iodine deficiency during this critical period can cause premature birth, miscarriage or delivery of a baby with low intellect.
The campaign aims to disseminate the ill effects, prevention, and signs and symptoms of goiter or bosyo in Filipino.
Goiter Awareness Week is observed every 4th week of  January  of  every  year  declared  under Presidential Proclamation 1188 on December 11, 2006.

Depression is sometimes referred to as the "Black Dog". Just like a real dog, it needs to be embraced, understood, taught new tricks and ultimately brought to heel.

Depression can happen to anybody. If you are in difficulty, never be afraid to ask for help. There is absolutely no shame in doing so. Recognizing depression and seeking help is the first and most critical step towards recovery.

Source: World Health Organization Philippines. (16, January 2019). I had a black dog, his name was Depression.Retrieved from: https://www.facebook.com/whophilippines/ 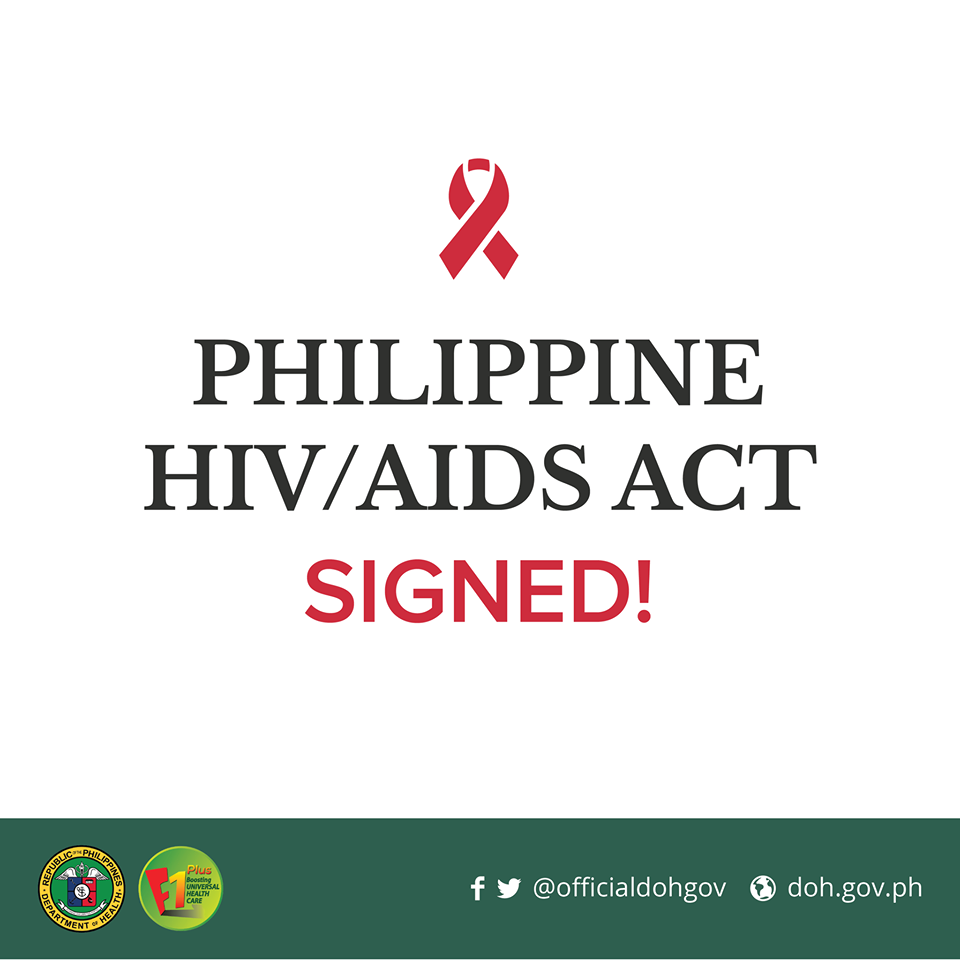 Secretary of Health Francisco T. Duque III released the following statement today on the signing of the Philippine HIV and Aids Act by President Rodrigo Duterte:

The law provides comprehensive education and prevention programs for PLHIV and their families. It also enables minors 15 years of age to get tested for HIV.
While the new law has been enacted, our next step is to be able to properly execute the law by developing an Implementing Rules and Regulations to guide executive officials in implementing the law, as well as the public in how to comply with the law.

A stronger collaboration is key to attaining our vision of an HIV-free country. The road ahead will be long and our climb will be steep, but we will thrive and win against HIV and AIDS.”